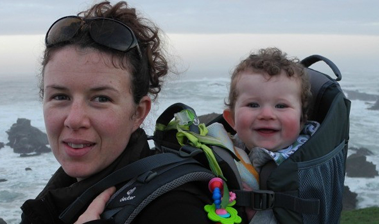 Marina Cochran-Smith and Chad Swimmer had just had their first child, Oliver, via home birth. Like countless newborns, Oliver developed jaundice. Jaundice occurs so frequently that many doctors consider it a normal part of the first few days of a baby’s life. Most cases are short-term and ultimately harmless. But once in a while jaundice escalates and becomes a very dangerous condition that can result in hearing loss, brain injury or worse.

A few days passed and Oliver still had symptoms, so the couple took him to Mendocino Coast District Hospital. When the results came in, even the doctor was surprised. Oliver’s bilirubin numbers were the highest he’d ever seen. He decided to request an air ambulance to have Oliver transferred to a pediatric specialty hospital. A flight team from REACH 1* in Santa Rosa quickly headed to Fort Bragg to pick Oliver up and transfer him to UCSF Benioff Children’s Hospital Oakland.

Before long, REACH* pilot Jeff Barker touched down. On the helicopter with him were Flight Nurses Kyla Betts and Jennifer Fennerl. Marina describes both flight nurses as “phenomenal and professional”, and Chad says of meeting them, “They both seemed incredibly confident. They were so efficient under pressure. It was easy to trust them.”

When they arrived at the Oakland ICU, Oliver started phototherapy. This treatment uses a specific type of light that makes it easier for an infant’s liver to process bilirubin. Fortunately, after a few hours under the lights Oliver’s numbers went down significantly, making a transfusion unnecessary.

“We were out of there in less than 48 hours,” Chad reports. “Oliver had a fantastic recovery.” Marina says, “One often hears the phrase, ‘You saved my life!’ used flippantly. Now we know its true meaning, and there are no words that can accurately express our gratitude.”

Marina is also very positive about the value of their family’s REACH for Life* membership. The expense of the REACH* medical team and air ambulance flight was covered by their membership, so the couple can now focus on saving for Oliver’s future.