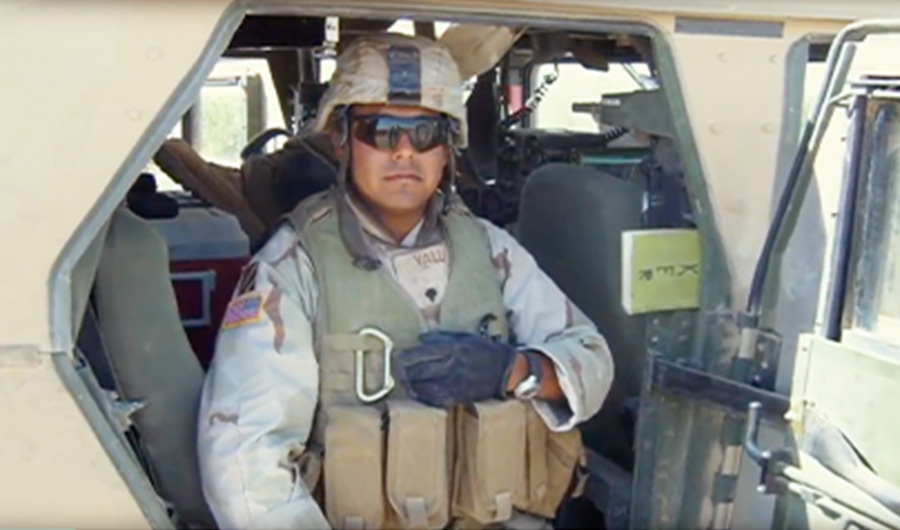 Cristian Valle’s specially adapted custom home literally set the stage for his future. After receiving the keys to his home on Feb. 10, 2018, Cristian was finally in a position to pursue a longtime dream of his: acting.

The experience Cristian has as an Army Infantryman may seem completely unrelated to his new role, but his two careers are aligning well. In his most recent project, Cristian plays Rafa, an injured military Veteran, in Miu Miu’s Women’s Tall Tales video series. The film takes place in a fictional Iraq village, and was filmed in California.

“I always wanted to do acting, or be an extra in films and shows. My new home in Southern California gave me the opportunity to pursue this dream of mine now that I live closer to where it all begins,” he says.

Although Cristian is excited about his new venture, the thing he is most grateful for is having more time for family. He could not access the outside of his previous home easily, forcing him to spend most of his time inside. Within the home, Cristian often became frustrated because daily tasks were difficult – or impossible – because there was no room for his wheelchair. This made it hard for him to fully be present with his wife, Blanca, and their four children. “Life has just been a whole lot easier since moving into the home. I have the freedom to do more, and I can help out around the house and hang out with my kids in their rooms,” he says. “With nothing to stop me, I go out and do it. Life is just more relaxing for me with less things to worry about.”

Blanca is relieved she no longer has to worry about her husband’s safety and well-being. “It brings so much comfort to our family, especially for Cristian. He has the freedom to go anywhere without fear of falling. The home has brought us more peace and financial stability,” she says.

As for the next scene in Cristian’s acting career, he’s currently working on another project that’s set to be released this spring, and enjoying the ride to see where it takes him. There’s one thing he’s sure of – he’s appreciative to HFOT’s donors and supporters for providing him with the comfort and stability of his forever home. “Thank you to everyone involved, we are loving our new home,” he says.