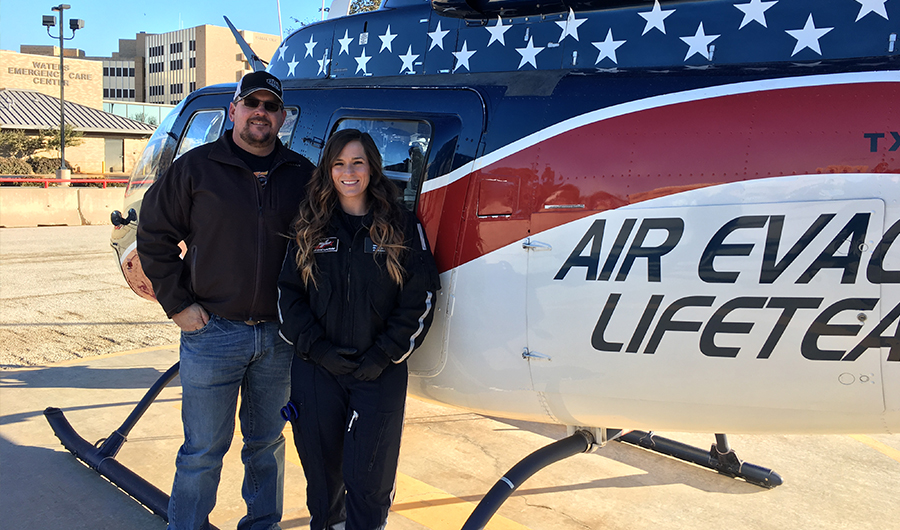 AirMedCare Network member Sarah McLen  received a phone call on January 31, 2016. The voice on the end of the line said, “Sarah, this is Monte. Are you close?” Sarah’s husband, Frank, had been in a motorcycle accident. A truck ran him off the road at a steep curve. He went through a pasture with numerous trees before hitting a mattress that threw him into a new barbed wire fence and some brush.

The wreck occurred on Monte’s property, and Monte’s wife discovered the accident. Sarah says, “Frank was conscious enough to give them my name and phone number. Monte called 911 first and then called me.”

EMS took Frank to Hendricks Health System in Abilene. Because of the extent of his injuries, Air Evac Lifeteam was called to fly Frank to University Medical Center in Lubbock —a Level 1 trauma center.

Frank suffered a skull fracture and had a brain bleed. His left orbital socket was fractured in several places, along with broken ribs and vertebrae. Frank also had a deep gash on his forearm, which separated his skin from the muscle.

Nearly 2.5 years later Sarah says, “We’ve had the best outcome possible. The brain bleed is not an active bleed and he was released neurologically 18 months after the accident. The arm affected by the degloving injury has returned to full function. The doctors told Frank he had angels in his corner that day.”

Sarah also praised the Air Evac team that transported Frank, and the patient accounts team that worked with her following the accident.

“When someone called me about paying the hospital, I remembered that I had to call Air Evac,” she said. “The lady that I spoke to asked me, ‘Before we start talking about all of this…how is your husband?’ Filing the claim was a piece of cake. Dealing with Air Evac was definitely the easiest part of the whole thing. My employer, Big Country Electric Cooperative, pays for AMCN membership for its employees. It’s an absolute blessing.”